Well, if fish keeping is your hobby and you want to know about the ‘Nemo’ in real life! You are at the right place. This most renowned fish is ‘clownfish’ and we have to be thankful to the movie ‘Finding Nemo’ for the popularity of this marine aquarium fish.

Clownfish is the most well-known salt-water fish and it has more than 30 known species with peculiar-pattern of swimming like dodders. Anemonefish are found in many colors but mostly identified by their vibrant orange color with distinguishable white bands. These are found in shallow waters of the Red Sea, the Indian Ocean, and the western Pacific.

Types of Clownfish on the basis of variety of species

There are thirty types of clownfish which are divided into six groups called complexes, given below:

The most distinguishing feature of this group is the dorsal skunk/stripe (long white stripe that runs along the entire length of their back). Some other features that separates skunk complex from other five groups are their small size, easy to keep in captivity, their quiet behaviour and most importantly the fact that they were the  first inhabitants to be kept in an aquarium.

They are not so popular in the fishkeeping community but are really hardy in nature and can bear bad water quality, poor nutrition and could survive in ammonia spikes; Though we won’t recommend keeping them in such an environment as it may cause them to feel stressed. They are believed to be quite durable, rugged, unafraid, truculent species. Tomato complex fish are the best choice if you are a beginner in fishkeeping and are easy to breed. They are less pretty than other ones and they could be identified by their one stripe behind the eyes.

The distinctive feature of the members of Saddleback complex is the saddle-like pattern of white stripes across their body, their dark color primarily black or brown base with highlights of yellow or orange color. These are larger in size, slenderer in shape and skittish in nature as compared to other complexes.If we talk about the ease of keeping these group members, it’s relatively difficult and demands utmost care.

Suggested features of aquaria for this group:

Eleven species are included in this group. A number of species are collectively called sebae clownfish but the true-sebae clownfish is the member of the saddleback complex. Clarkii complex group species, we could say, were included in the complex on the basis of similarity in their color. These species are very easy to keep. We could identify them by their color pattern but more accurately by morphometry, scales on the head and shape of their tooth.

Among all, clarkii clownfish is the most common type of species.

The members of this group are the largest among all. They are belligerent, territorial and grappy for other species. They are notorious for their pugnaciousness. Maroons are similar to percula groups in shape and swimming.

READ  Three Band-Clownfish; All about Aquarium Set up, Care, and Breeding

Maroon clownfish is the most common among all other members of this group.

It is the most common and popular clownfish that you can easily buy from any pet store. They are mainly orange in color, with white stripes on their body. Percula group members are one of the smallest types. These are calm in nature.

If, we classify clownfish on the basis of color pattern and number of strips, they can be divided into five groups:

Most popular Types of Clownfish Clownfish suitable for home aquarium

There are many types of clownfish but here, we are going to talk about the most popular ones of them. They are attractive and pretty because of their different color patterns and stripes on their bodies. 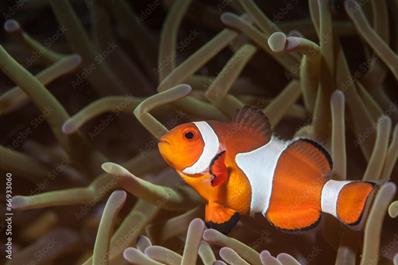 False percula is the fish that is fairly resistant in the aquarium, it’s very difficult to ship them from one place to another. They are bright orange in color with black border around the stripes and fins and have ten to eleven spines in the first dorsal-fin. These fish have three vertical bands around their face, body and tail regions. 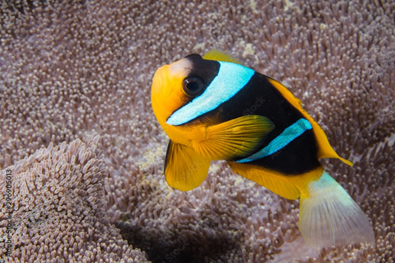 It’s a member of the Clarkii complex and is so beautiful because of their outstanding color. They are dark-brown (closely black) in color with highlights of neon-orange on the underbody and fins. This member of the clarkii complex has two white stripes that look like it divides the body in three parts. If you keep them with the right care, they may survive for more than twenty years.

Allard’s clownfish is easily confused with Clark clownfish just because of similarity in their appearance. They have white stripes and yellow tails can be a distinguishable feature. These can swim better than other clownfish and are not dependent on sea-anemone. Allard’s can be kept in the aquarium without much difficulty. 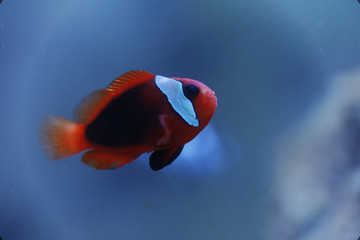 The peculiar characteristic of cinnamon clownfish is their burning orange color, also called as fire fish. As they become older, the color of the borders of their body becomes darker while the color of the body remains warm-orange. These fish have thick-white vertical stripes on the back of their face.

They have grumpy, irritable and bad-temperament therefore called fire clownfish. Cinnamons can’t live with other clownfish and even if you don’t keep more than a pair of them, it becomes problematic for you. These are very resilient to keep in the tank so, it is a good addition specially for novices. 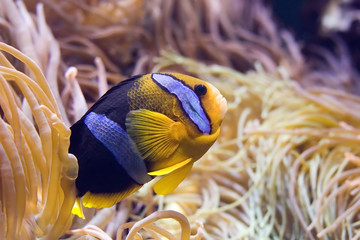 Their common name is yellow-tail clownfish and are stunning and attractive. Clarkii are bright-yellow in color with dark-brown scales and white-stripes. They have two humped-dorsal fins on the top with slightly curved bodies.

Clarkii clownfish are easily frightened and hectoring in small tanks but wild-environment they could live with pink skunk clownfish. These are very adjustable and resistant in nature hence, are popular among saltwater aquarists. 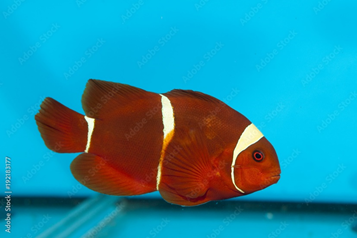 Maroon clownfish are the largest clownfish species, are eye-catching because of their burgundy and bright red color and have three uneven-stripes. Relatively decent white stripes, these strips could be yellow depending on the fish. They have a cheek spine so named as spine-cheeked clownfish. They are smart enough to recognize their caregivers.

Although maroons are very easy to keep in captivity, due to their aggressive nature, beginners might experience some difficulty.

These are pale colored fish, have a pastel orangish brown body and light-orange-colored fins. Oman clownfish have 2 bold-white stripes around their forehead and the body. However, they are very difficult to find in pet stores. Omans have a better swimming ability than other clownfish species. They could live without sea-anemones. 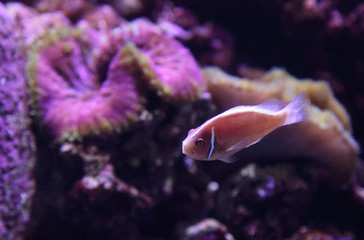 They are very beautiful because of their coral-pink color. Pink skunk clownfish have soft-pink or slight peach-colored scales. These fish have a very thin dorsal-fin that runs evenly down their spine. Contrastingly, they have a single white-strip, runs vertically along the back of their eyes. This species of skunk group can seldom move, not even at the time of meal.

Pink skunks could pair up with clarkii clownfish and true perculas and live peacefully. These fish are shy in nature so are susceptible to being frightened by other fish. However, they can be a little difficult to handle for beginners. 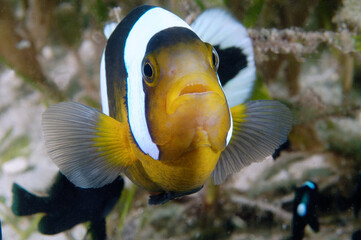 Saddleback have attractive markings and colors. They could be black to burnt-orange on their bodies. These have bold-white strips, running all along the dorsal-fin. According to their name, saddleback clownfish have bands that form a saddle-like pattern over the bodies. They have a characteristic white-strap just on the back of the head. This member of the saddleback complex could live with other clownfish i.e., true or false perculas and even pink or orange skunks with squabbling. 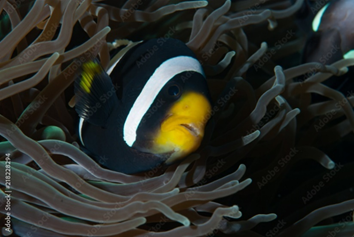 Sebae clownfish have dark-colored almost black scales with 2 white-stripes, yellow face and an orangish-fins, and tail. They are extremely shy. Sebae clownfish can pair up with sebae anemone but even with the high level of comfort with an anemone, they will crash out of the tank leading them to death. They are easy to keep.

According to their name they have three white strips on their body with variable width of the strips. Three-band clownfish are dark-brown in color with orange face and fins. These are active in nature and live with sea-anemones.

Their name is not because they are a member of the tomato complex, it’s just because of the vibrant red color of them. They have only one white band at the back of the eyes. As tomato clownfish become older they become more regional and are semi-aggressive in nature. These fish are very choosy in the selection of the sea-anemones to live together and only could pair up with bubble-tips.

True percula are confused with false percula because of little differences. They have very unusual and uneven white stripes and also have black patches on their body. True clownfish are classic-bold-orange in color with 3 white stripes with thick black border runs along their body. If you see them close to you, you can see their light orange color of eyes, yet it makes it difficult to distinguish them from false perculas . These fish have sensitive immune systems, so need proper care in captivity.

FAQs Related To Types of Clownfish

Can different types of clownfish be kept together?

You can keep only two clownfish together in small tank size but can keep more depending on the tank size.  If you keep more than that you might face difficulty because of their aggressive behavior. In contrast, if you keep a single clownfish it might result in wearied and depressed fish. It is very important to introduce different types of clownfish at a very young age to familiarize them with each other. It will help them stay peaceful as they grow up together.

Yes, clownfish are ideal pets for amateur fishkeepers because of the ease of keeping them. Clownfish are hardy and do not require much care and their colorful bright patterns give a fresh change to your personal life.

Yes, clownfish is unfortunately an aggressive and territorial pet. Though if kept in a comfortable environment where they don’t have to fight for their survival in coral reef tanks, they can be quite peaceful.

As mentioned earlier, there are many types of clownfish with different colors from orange to tan, to yellow and brown to black. There are a variety of vertical white stripe patterns with and without black borders. We also talk about the length, difficulty, temperament, tank size, preferred anemones, lifespan and costs.if you love to keep fish at home, these are the eye-catching additions to your own aquarium but need proper care and environment to survive. Select sensibly according to the requirements and compatibility keep in mind and make your aquarium more beautiful.

This site uses Akismet to reduce spam. Learn how your comment data is processed.